Posted by Chowgene Koay about 10 years ago

Combining technologies and concepts could improve processes in developing soil, health, and fertility.

Permaculture can be continually and infinitely expanded on the developments of systems and the combinations of systems.

I've been recently reading up on the integration of black soldier fly (Hermetia ilucens) and earthworms such as red wigglers (Eisenia fetida). Referring back to the permaculture chicken, it is beneficial to determine the necessities, habits, behaviors, intrinsic traits and so on of the organism.

To integrate black soldier fly and worms requires the same concept. After considering the process, it can become clear what are the hurdles that need to be addressed to move out of the limitation of the impossible, to the possible, experimentation and trials and finally the reality.

Black Soldier Fly enjoy temperatures of 90-94 degrees Fahrenheit while Eisenia fetida enjoy temperatures ranging from 70-84 degrees for optimum health. Furthermore, black soldier fly effluent attracts the female fly to lay eggs there. If earthworms are to coexist in this environment, they have to endure the temperature extremes. The liquid effluent from the soldier fly also creates a dilemma if the worm castings are desired for garden beds.

These limitations present the dynamic of what needs to be considered for this integration to be successful, and there lies an answer (in the title). Lets consider the life cycles of the black soldier fly.

Black soldier fly can reduce food and manure by 95% within a day. Containers are also created so that the soldier fly are self-harvesting as the mature pupae search for ground to metamorph into the adult fly and reproduce.

Since they are self-harvesting, black soldier fly can feed themselves to a flock of chickens who will then form a package of fertilizer for our earthworms to digest into rich castings. In the picture below, the BSF bin can be placed next to the coop. It is missing a ramp for the pupae to travel to their fatal death. Some can be saved to ensure that the populations of Black Soldier Fly larvae remain adequate for chicken feed or expansion.

There does lie another issue of th 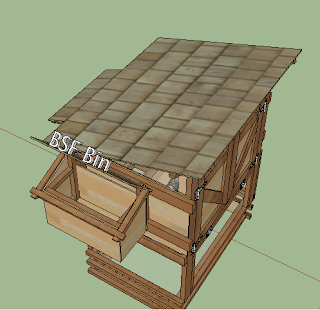 e chicken manure being too hot and the habit of chickens to eat insects such as worms. This can be turned into a benefit and an opportunity.

Eisenia fetida is preferred due to its nature of processing large amounts of food. However, chicken manure is rich in nitrogen and will spark a compost pile when added with water and carbon sources such as paper and cardboard in a worm bin. Furthermore, we don't want our worm populations to dwindle as open chicken feed.

To cure these ailments, we can seperate the worm bin into seperate areas based on the temperature. One region will be for hot activated compost, warm compost, and cool worm castings. We then create a barrier between our chickens and the worms so we can allow the worms to happily multiply and reproduce.

By simply mapping the resources of each of these organisms we can move toward potential systems that cater to the ecological and economic success through permaculture. Although this does not entirely address the integration of black soldier fly and earth worms, it can still be separately integrated and complimented. Food sources such as duckweed are separate from fish or animal sources since they can be diminished if not readily available, endangered, or shifted from optimum conditions (temperature, habitat, etc).

The effluent from black soldier can still

Other potentials exist as well to create further possibilities. For example, the chickens can be positioned above an aquaculture system where their manure will feed bottom feeders who feed plants through an aquaponic system.

The next evolution is to integrate these concepts within our social realm so that the disciplines of ecology, economics and sociology are utilized to create new potentials for solving world problems. The next post will provide a framework to cure the social diseases of our society (such as poverty and its associated ailments) by using these methods to create the foundation of our well being.

Matthew Lynch : i love the thought processes of linking all the elements together here... we've used a deep mulch system of 1-2 feet of woodchips (or other dry, woody carbon material) in the chicken coop to integrate chickens & worms. the chooks' natural tendancy to scratch turns their droppings into the deep mulch, which is like turning a compost heap. worms come up to feed from underneath, and castings can be harvested every 6 months or so by scraping back the top layer of woodchips to reveal the rich castings below. the odd worm will get nailed by a lucky chicken now & then, while all that carbon material soaks up any chickenpoo odor. perhaps if we placed the black soldier fly bin within the coop in its own corner the three animals could be integrated effectively - we're going to give it a go anyways. -ML- PS love ur howto SketchUp posts, very helpful!!
Posted almost 10 years ago

Rick Allen : Excellent report. And with a rocket mass heater and greenhouse, chickens as well as fish can have a healthy diet all year long. Going to have to rename the black soldier fly to Permafly or something equally idiotic. :P
Posted about 8 years ago
My Badges