Back to Richard Perkins's profile

Posted by Richard Perkins about 9 years ago

Our final trip in the UK is up at Wakelyns Agroforestry Research plot, home of Martin Wolfe and his wife Ann who have been developing trials and pioneering work here for 25 years.  Martins work began in Cambridge research laboratories where he studied plant pathologies and over the years Martins passions have integrated his learning’s with mixed grains for disease resistance with alley crops of timber, coppice and orchard trees on their 60 acre farm in Suffolk. 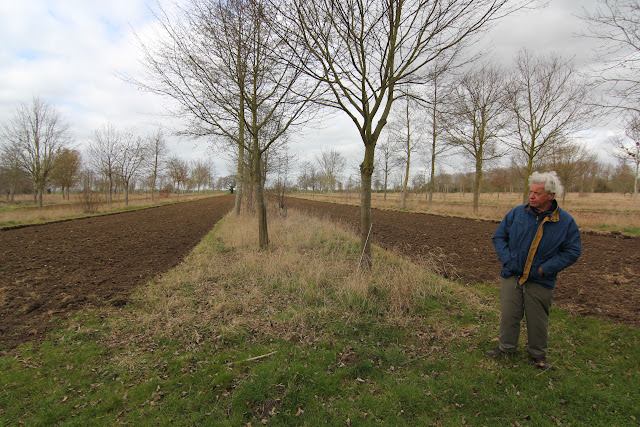 Whilst at Cambridge Martin was working on breeding disease resistant varieties of wheat and barley and became disillusioned with the corporate agricultural approach of fighting symptoms not causes.  In this regard it related to constantly breeding new strains that were then scaled up and planted in vast monocultures until mutations rendered them useless and new varieties sought.  This nonsensical approach led Martin to develop mixed plantings to give organic disease resistance, having studied diseases such as powdery mildew and understanding how infection spreads;

“In a monoculture, if a single spore infects one leaf and produces more spores, many will have a high chance of success because they will land on identical susceptible leaves wherever they are dispersed. In a mixture, however, even with only three different varieties, there is a greater spatial separation among identical plants than in a monoculture. So, spores of a pathogen produced on one plant are less likely to be blown on to an identical plant that they can infect - and so disease spreads more slowly. The spaces between identical plants can be occupied by more resistant plants, thus providing a physical barrier to spores being blown from one susceptible plant to another.”

Having worked on influential trial with great success of mixed grain plantings (that had greatest impact in Germany until the wall fell and the work mostly vanished) Martin wanted to explore how to integrate this methodology into more complete and regenerative systems, and after a long spell in Switzerland returned to the UK with his wife Ann to set up the research farm.

Martins work at Wakelyns focuses on the repeated pattern of alley rows with around 12m spacing for the row crops to allow for the whole range of modern agricultural machinery, save perhaps the larger sprayers employed in todays broadacre swaths of monocultures.  Here research is focused around 4 rotations, 2 leys and then a potato crop to create an “even field” before planting and trialing grain experiments.  Martin has used this patterning to explore long term timber production, biomass/ craft coppice and orchard plantings between the row crops.  The spacings of the rows are key to agroforestry, as in orientation.  Here the rows are orientated N to S to minimize shading of the crops.  This is a level site where imposing this layout is not a problem, but my design brain started considering the implications on any site with significant slope where conventional tillage up and down the slope leads to obvious run off and nutrient leaching from the site which is far from ideal.  In this scenario we would plan to plant on contour, and due attention would need to be given to species choice and spacing’s to minimize shading of crop rows.  It all depends on what is being grown in the rows in terms of both trees and crops/pasture, but slope is obviously a very important design consideration when implementing long term perennial systems.  Martin explains how he has observed beneficial interactions between trees and annuals at the kind of spacings used here, and potentially quite wide rows up to about 24m, commenting that these interactions then start to fall away if the spacings get wider.

“Much of the mixture research has been carried out with cereals but, because of the fundamental nature of the phenomenon, there have been successful experiments with other crops including, for example, apple, rape, coffee, potato, peanut and soya. Similarly, because the same mechanisms work for many fungal pathogens, multiple disease restriction is possible. For example, during last season, in organic trials run by Elm Farm Research Centre (EFRC) in the UK, we noted simultaneous reductions in three diseases, powdery mildew, Septoria and leaf (brown) rust on some wheat mixtures.”

What struck me most about the site and implications of Martins work were the adaptability and beneficial impacts this work can have to all kinds of agricultural operations with a relative ease of establishment in a wide range of situations without a huge amount of inputs or disturbance.  The benefits in a nutshell are wide ranging

Martins site contains various experiments and adaptations of the same basic patterns which are explained below.

Martin is well aware of climate change, “global weirding” as we call it, and diversity remains his key for resilience in terms of both pest and disease control as well as ensuring useful yields from different species to ensure the farm relies on diversified income streams.  Returning to diverse, mixed and more human scale operations feels paramount to true food security.

The timber species are a mix of quality hardwoods and legume support trees, in the rows pictured there is ash, oak, lime, alder and wild cherry.  The best quality timber comes from trees pruned of their lower branches early in their lives so the knots heal up inside the tree to produce much higher quality timber.  This is also necessary to allow more light into the alleys in winter when the sun is low in the sky, making this seem a very functional arrangement.  As Martin points out, we cannot predict the future climate or markets so easily, so diversity is the cushion to a mixed enterprise.

Ground preparation for all the tree strips begins with a rotovation or other surface prep before laying mypex weed barriers to ensure no competition with grasses whilst the trees establish.  There is scope for mounded lanes with leguminous ground cover such as clover sown in.  Protecting the young trees from rabbits and deer is a major design consideration also.  The quality of ground preparations is key to ensuring rapid soil development to tip the tree strips towards more complex fungal populations.  This can be achieved through compost teas and inoculants as well as mulch and litter systems which select for fungi naturally.

Here at Wakelyns the timber rows have been left to regenerate and already the natural woodland edge species are returning and colonizing, along with as many bird species as there are acres, contrasted with the barren acreage of large farms surrounding this site.

Timber on farms is a very important consideration, for many reasons, but with timber in mind farm succession comes to mind.  With enough timber a mobile sawmill makes a high value product, particularly combined with a home built shipping container kiln set up.  The trees here represent a living and tangible retirement package generating more value than a bank promise could.  It also represents the house the grand child may need to rebuild and its this long term planning that needs to be built into farm enterprises.  Another fascinating consideration is Jean Pains pioneering work from the 1950s producing farm scale compost, methane and hot water from 40 ton compost heaps.  Ive yet to find anyone on the planet actually doing this today- we would love to go and visit anyone who is!
Orchard Polycultures

Tree monoculturessuch as orchards have the samedisease problems as any crop, and here apples and other pome and stone fruit and planted on wider spacing’s interspersed with N fixing support species such as Alder.  Disease is absent and with mixed incomes this model represents a viable commercial pattern.  It makes me think of taking this idea and developing linear forest gardens to crop on multiple layers and improve beneficial interactions along the tree rows, certainly could be a very useful scale on smaller scale operations.

It seems yields are only slightly reduced in the rows at these spacings so I got very excited about the potential for “retrofitting” mixtures of these approaches into design work Im involved with.  On a windy island like our own the benefits of tree rows in crop fields could be felt even in March before trees have even budded!