Back to Mt Nathan Project

Earthworks on the bottom 40

Posted by Scott Hall about 8 years ago

The earthworks on the bottom 40 have been completed, it was heart in mouth all the way, as the steep incline made it quite hectic going with the machine.

My Father and I had pondered what would be the best kind of earthworks for the 'Bottom 40'. We considered 'Net and Pan', a set of small swales approx 10m apart and also a combo of both, where in between swales there would be a net and pan. As it turned out it was far too steep (43%) for any swales, the one we did make ended up near vertical at the back and front and too small in capacity. The net and pan could have worked but two problems arose; the first was that in between the net, we still had steep incline that was largely unusable and hard to access -with the rainfall and temperatures here, nature would have stacked it full of ecology in no time, and left us lagging far behind. The second was that the net part of the job would have more than doubled the cost.

We ended up closing all of the pans up to create a scale pattern- like on fish and snakes but inverse, it soaks instead of sheds. 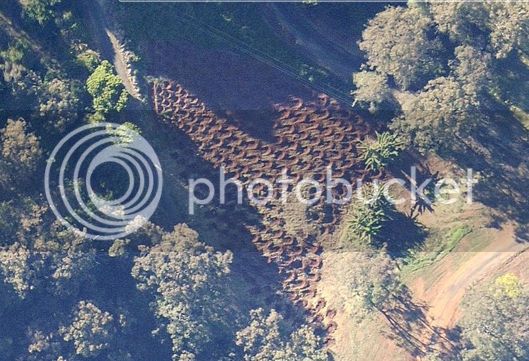 The tool we used was custom made for the job. It was an old 3 point linkage grader blade that we had cut gussets from the back to create half of a hex, and then the top was modified so the 4 in 1 bucket could pick it up- the same way it picks up a level bar.

We ended up pretty happy with the result, although the machine was on the edge of it's limits with the incline- always wanting to drift sideways away from the slope, needing the bucket dropped to stop the machine tipping downhill- and it is a tractor specially designed for steep grades too!

We feel we can now plant a food forest with an annual productive groundcover that will work as a market garden until the canopy climaxes and shades out the floor. Each pan or 'scale' will be a guild containing a tree, shrubs, vines and support species of all kinds.

I can now get around on the 'Bottom 40' without skittling downhill on my bum so many times!

Jennifer Wadsworth : This is beautiful - can you post follow-up pics of what it looks like now, please?
Posted almost 7 years ago
Courses Taught Here!
Project Badges