Posted by João Gonçalves about 10 years ago

there's no where else to go ... there's lots of xist rocks and not much soil. crystal clear water springs from the xist rocky slope - the reason why we are here, after all ...

... on convex ridge and valley slopes.

"In agriculture, a terrace is a piece of sloped plane that has been cut into a series of successively receding flat surfaces or platforms, which resemble steps, for the purposes of more effective farming. This type of landscaping, therefore, is called terracing. Graduated terrace steps are commonly used to farm on hilly or mountainous terrain. Terraced fields decrease erosion and surface runoff, and are effective for growing crops requiring much water, such as rice." 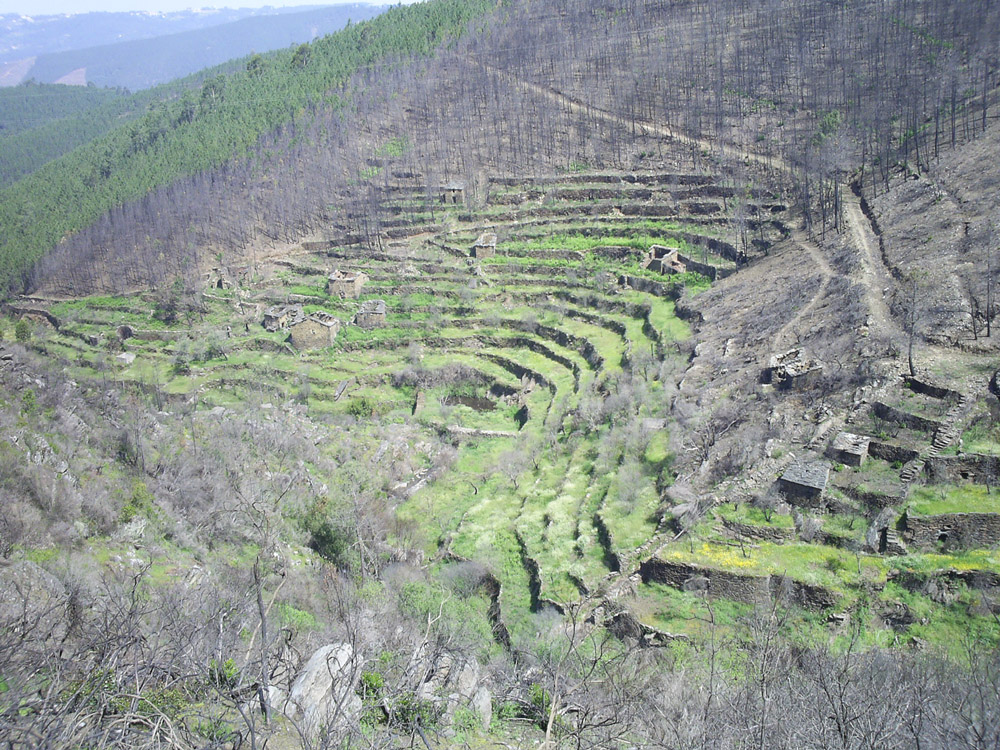 The terraces on the left face south, in the centre face west, and on the right face south.

At the bottom of the slope runs a creek where small "summer" moveable slate walled dams were built to hold water for maize and potatoe crops on the terraces. 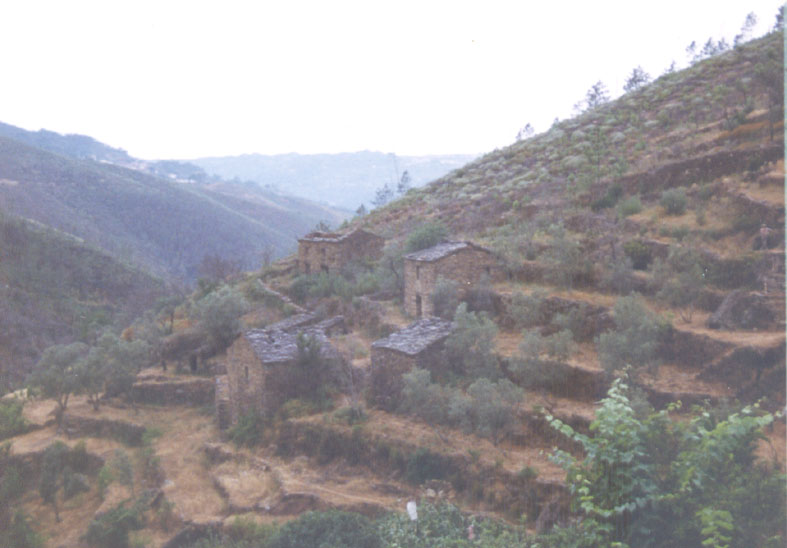 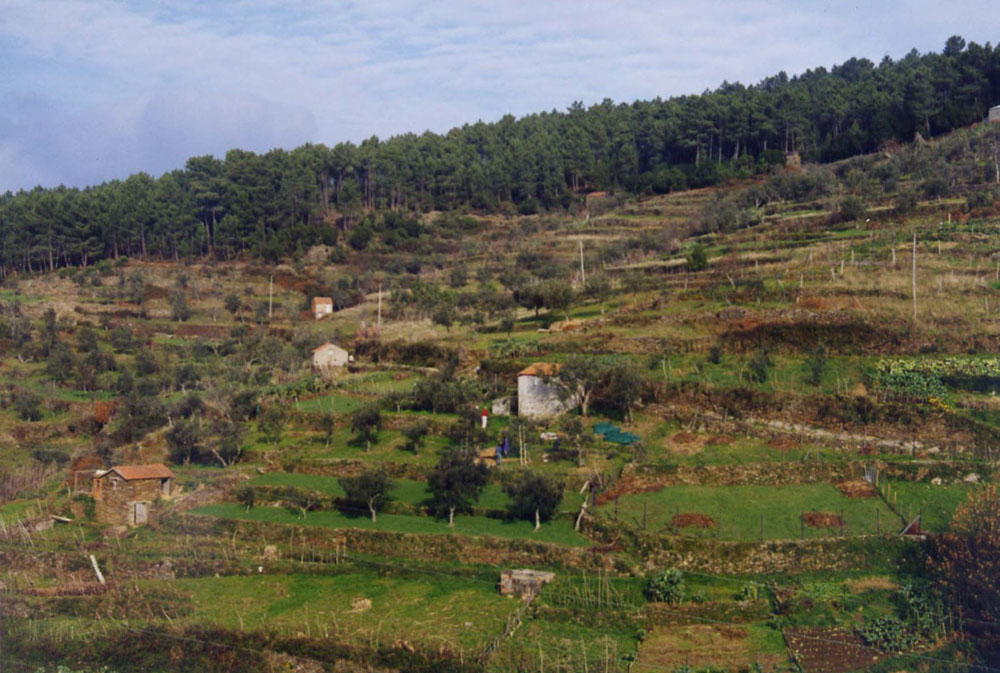 Pic. 3 - Winter 2004. South-west terraces in December, during the olives harvest. Yellow turns to green, pastures for sheeps and goats, both under olive trees or on maize fields, after harvest. Pinus pinaster trees on the ridge line above, with arbutus trees on the edge in between. Olive tress on the higher and west side terraces, non-irrigated plots. Small goat sheds, for groups of 3-8 animals in each, scattered on the terraced slope.

Maize fields after harvest are sown with rye during the first september rains, becoming rye grass pasture fields through the winter and early spring.

On the lower border of each terrace vines are grown supported by wooden stakes, or pole and wire rows. 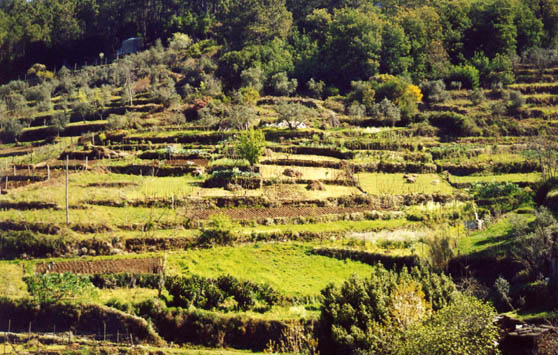 Pic. 4 - Spring 2004. South-west facing terraces in March-April. Heaps of manure in the center of some plots. A few plots were already tilled. Others are meadow or winter rye pasture. Forest of pinus pinaster, arbutus unedo and acacia dealbata above the terraced slope. Higher and drier - non irrigated - terraces planted with olive trees, and self sown meadow pasture under these. 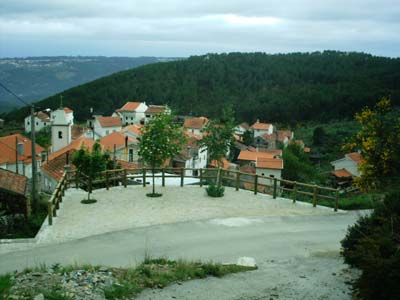 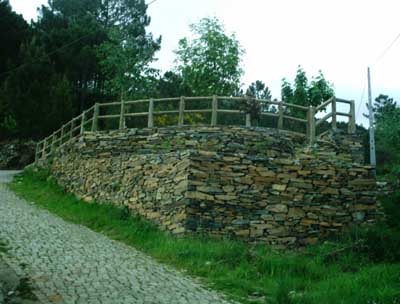 Pics. 5 and 6: The belvedere on the rocky ridge above the old village, stands on a terrace supported by xist stacked dry stone. It was built by two local dry stone wall builders with helpers. The grid is round pole treated pinus pinaster timber. This construction was organised by the local people's association "Progressive Union". 4 trees were planted for ornament and summer shade: plum on the lower terrace, maple, birch and sorbus on the higher terrace. Sorbus died after a few years, the other trees are growing well. 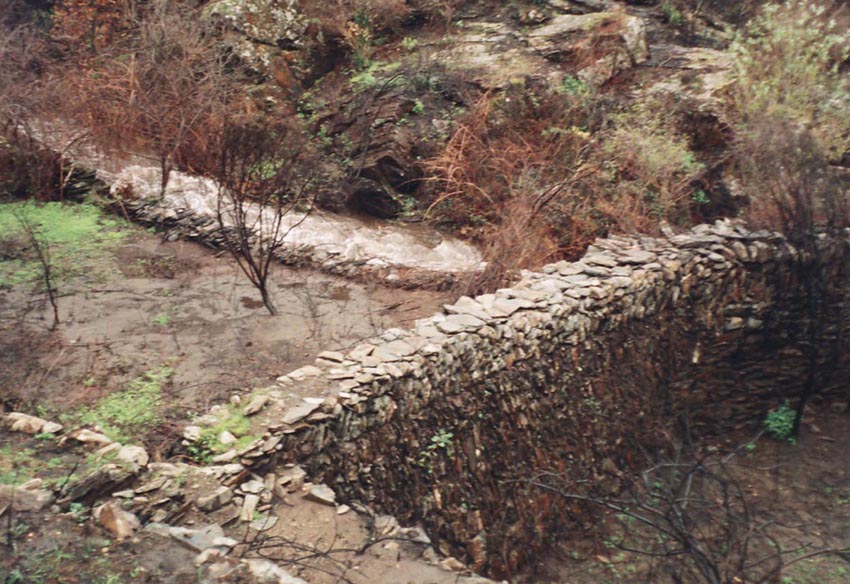 Pic. 7 - Winter-Spring 2006 - A rather level "large" terrace and 4-5 mts tall retaining wall on the right side of it, about 1mt thick, to hold and build soil where deep below was located the creek bed. The creek bed was moved aside using another 1mt width wall. 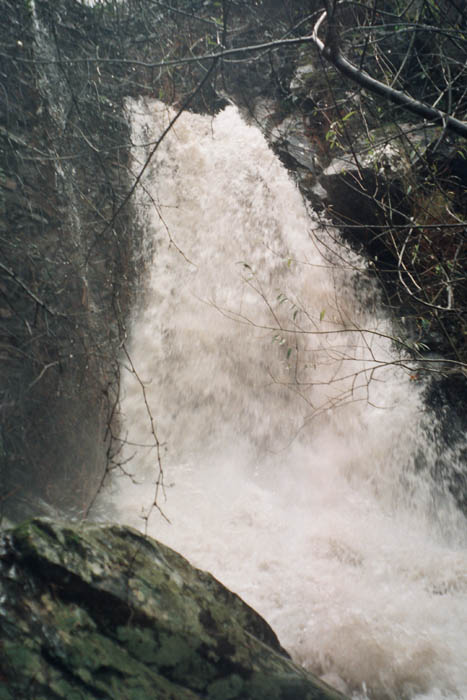 Pic. 8 - Winter-Spring 2006 - "Unnatural" waterfall, formed where a terrace about 7 mts retaining wall was built in the creek bed plus another 1 mt width dry stone wall was built to get the creek run on the south side of this terrace. An example of extreme river bed diversion to suit the need of increasing deep rich soil growing area in the sheltered microclimate bottom of the valleys. 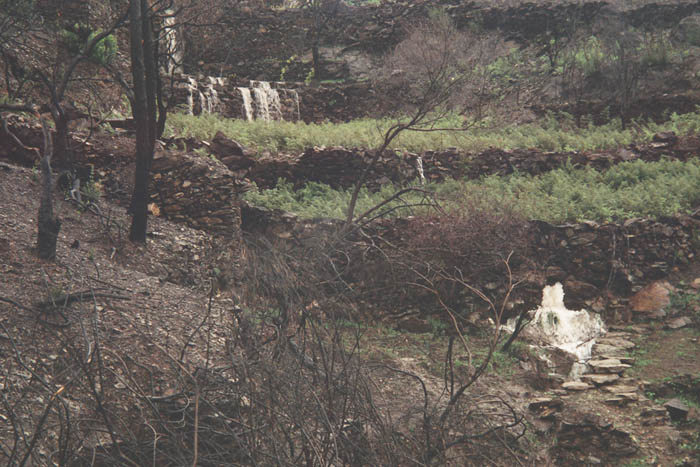 Pic. 9 - Winter-Spring 2006 - Terrace retaining walls were built in creek beds. After the forest fire waterfalls formed with the first big winter rains. Water channels underground were built and kept in the creek beds to move irrigation and storm water from higher to lower altitude terraces. 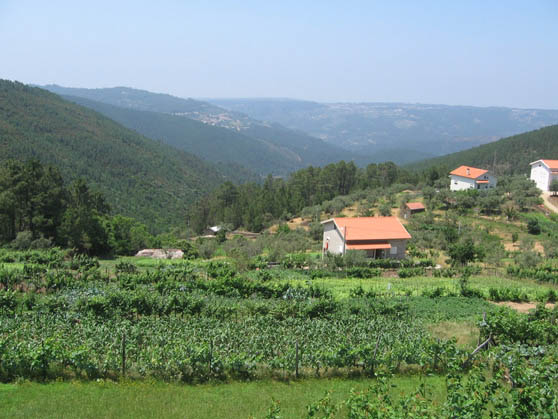 Pic. 10 - Summer 2004 - Looking towards west, a mosaic of different crops on the terraced convex slope landscape. Here we see grapevines in single rows on the edges over terrace reatining walls. Pasture, maize, potatoe, beans are typical crops of these Zone 2-3 terraces - these crops demand flood irrigation once or twice a week. The soil is fertile for about 20-40 cm deep, below that lies xist bedrock (used to build dry stack stone retaining walls), this condition makes this type of landform not suitable for agriculture, even though it has been used for it here for 100's of years, with our mountain farming methods ... 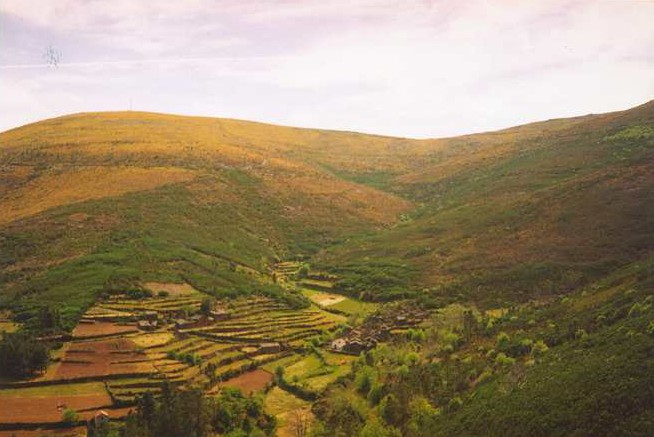 Pic. 11 - Spring 1993 - Almost all that is visible was burnt in the fire of 1988 and is in fast fire-resistant pioneer species regeneration. 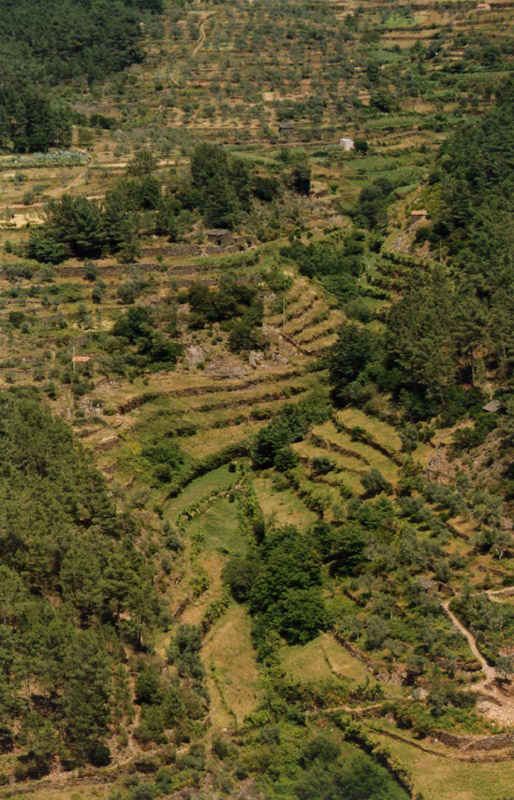 Pic. 12 - Summer 1997 - Almost from above view over the second biggest valley in Chão Sobral. Terraces were built aside the creek bed. The creek bed is located inbetween terraces retaining walls. In or near this creek bed there are a few water springs and this water is used to fill tiny dams built (logs and slate stone or planks, or with cement mortar and stone) in the beginning of the dry season and dismantled in the beginning of the wet season. In or near the creek bed grow figs, plums, apples, willows, chestnut, walnut trees. Along and on top the terrace retaining walls grow vines. In the "almost flat or less steep" area of terraced ground irrigated crops grow during the dry season, like corn, beans, pumpkin, potatoes. In the wet cold season grow brassicas, radishes, turnips. Pine trees and strawberry tree woodland on the left and in rocky outcrops patches. Olive trees - light grey green canopy on "less irrigated further away from dams" terraces both to the right and left. As people look for jobs most of these terraces turn to pasture where groups of 6 to 10 units of sheeps and goats graze for 2-3 hours per day maximum, in a rotational grazing regimes.