In keeping with the recent Star Trek references on the blog I thought that I’d introduce readers to the Antarctic Anomaly which is hovering over the South Eastern corner of this continent! In Star Trek speak, an anomaly is anything that is unusual or can’t be explained and that story trick is quite often rolled out to wind up an otherwise complex storyline that would be too difficult to finish in under an hour. Everyone has heard of the story finishing with the ending: “And then I woke up”. It’s a bit of a lame ending and everyone knows it.

Anyway, an Antarctic anomaly is sort of like that because the Bureau of Meteorology promised an “Antarctic Vortex” with snowfall down to elevations of 600m (1,968 feet). Storms damage homes in NSW as heaters cause fires in Melbourne . The weather here has certainly been windy, cold and damp. However, to me the conditions haven’t felt extreme and it was much colder a few weeks ago, though perhaps not as wet. Other parts of the continent have felt the winter bite much harder than here though and there have been reports of snowfall up in the mountains of southern Queensland and northern New South Wales which are normally very sub-tropical environments. Here, the vortex has simply has driven me indoors.

One of the interesting things about living on a farm is that there are a lot of outside activities to do. The weather therefore dictates through every season just how much outside activities can be performed. By necessity I keep a very close eye on the weather. This week I managed to put in one single full work day on the new chicken enclosure before the Antarctic Vortex hit the farm. The rain began on that evening too just as the sun dropped behind the horizon and I hadn’t yet put either the chickens or the tools away. Needless to say both: the tools; the chickens; and I all ended up a little bit wet.

A few days earlier during this week, I’d spent a day at a business where everyone was sniffling and sneezing. That sort of thing doesn’t bother me, but then the next day I started sniffling and not feeling very well either. I could not deny that the future weather was going to dump some serious rain with that Antarctic Vortex, so I just “manned up” and despite my sniffles, I got to work with the construction before the wild weather hit.

The new chicken enclosure has now had the steel roof battens installed. A roof batten is a fancy name for the horizontal bit of steel which the roof sheets are anchored too and there are three of them on each side of the roof. Roof battens in this instance also perform the useful function of keeping the roof trusses (the A frame bits of steel roof) upright and braced. The black internal door to the chicken shed was hung that day too. And I even had time – between all of the whining about being sick (spare a thought for the long suffering editor) – to install some of the chicken shed steel sheeting. I felt pretty good about the work done and day’s hard work did much to relieve the suffering from my sniffles.

No further outside work was possible after the rain hit. However, given that there is already an existing chicken run and enclosure I thought that it might be useful to share some of the things that aren’t working with the current structure and what I'm doing about it with the new chicken project. It highlights many of the things that I have learned over the past four years about chickens, their sheds and their enclosures.

The above photo shows the current chicken shed and enclosure and I’ve labelled a few points of interest with the letters A to E which I’ll now discuss individually:

For the rest of the blog entry goto: http://ferngladefarm.blogspot.com.au/ 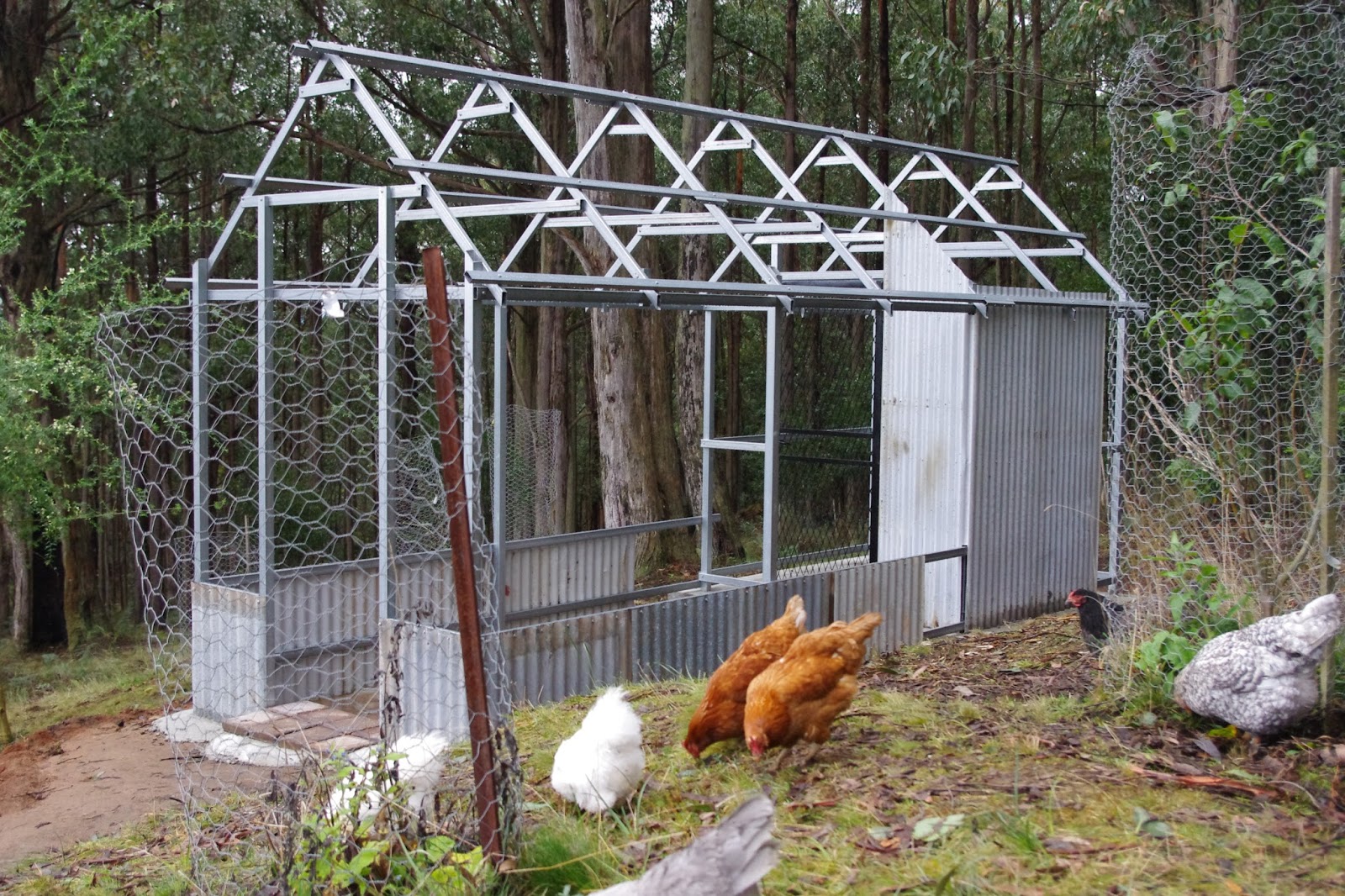