The farm has been in the grip of the Antarctic vortex for most of the week. The cold spell across the continent has been so strong that there have even been reports of snow settling on the ground in the mountain ranges of southern Queensland.

Sunday morning dawned cold and clear. In fact Sunday was apparently the coldest morning in 18 years. As I awoke to see what the new day would bring, the outside thermometer was registering -0.6’C (30.9’F) which was as cold as I can remember here. And a heavy frost had descended on the farm too.

Occasionally I display a softer side to my personality and I’d allowed the dogs to sleep inside the house in front of the wood fire earlier that night. By the time that the sun had begun to peek over the horizon the dogs were becoming restless and a bit fidgety. There is no better way to reward such early morning canine exuberance than to kick the little rotters outside into the very cold and frosty world of “outside land” - an unpleasant place at that time.

Scritchy the boss dog normally sleeps inside the house as she is of an age where such comforts are a perquisite of her position in the pack. It is worthwhile noting that the photo clearly shows every single muscle in Scritchy’s body was taught with the stress of encountering the full fury of the Antarctic vortex in all its frosty glory.

Observant readers will note the small log in the frozen herbage and may wonder about why that log is in that particular position. The reason for that log is that I’ve been watching the movement of the sun and over the next six months or so I’ll install another four solar photovoltaic panels in that general location.

Frosts are very rare at the farm, so I also braved the frozen conditions - purely for research purposes mind you - and took the camera out into the frosty conditions so as to take some interesting photos for this blog. One such photo was the native birds watering well on top of one of the water tanks which had frozen solid overnight!

The weird thing about frosts is that they wash out the normal colours in an environment and leave a sort of sepia toned perspective. However, some of the citrus fruit trees (limes, lemons and grapefruit) were having none of that and they delivered their usual consistent winter cheer with lots of fruit.

The frost eventually thawed out, but in the meantime I enjoyed the occasional latte or two and kicked back and relaxed. It occurred to me this week that it is actually possible to achieve far more work during summer (despite the excessive afternoon heat) than during the depths of winter, when I have serious reservations about working outside during the frozen conditions. 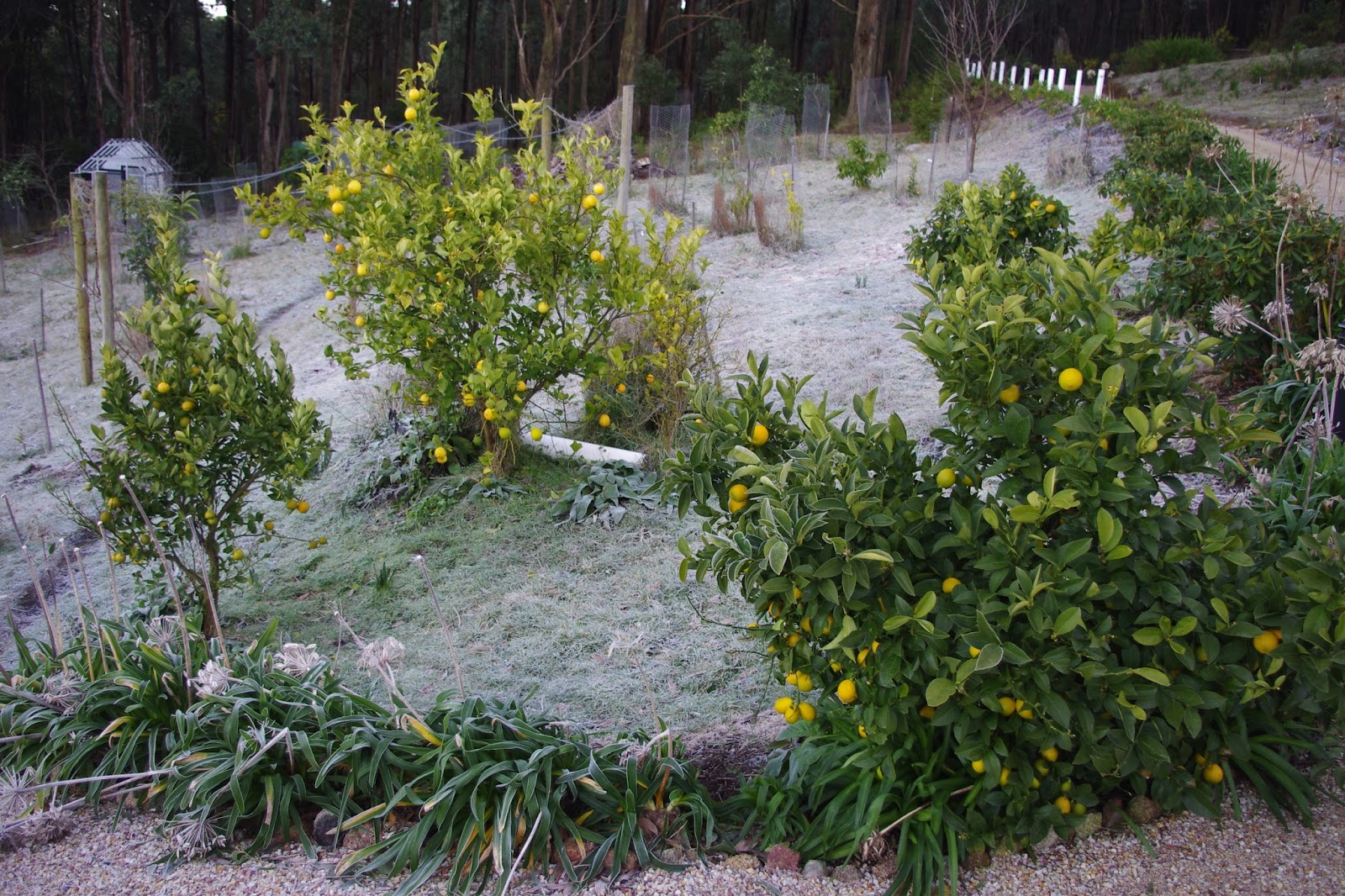