Some weeks the weather here can be very mild and pleasant and it can be a total joy to be outside working on projects around the farm. Some weeks though the weather can be absolutely feral.

This week, I totally cleared my diary of work and social obligations and focused entirely on fast tracking (i.e. completing quickly) the brand new chicken house and all weather chicken run (code named: Chooktopia). Not even the heavy snowfall on Sunday and near freezing temperatures could derail this juggernaut of a project!

On reflection, it was actually a bit cold that day and just to keep warm, I was wearing two t-shirts, two wind cheaters, in addition to track suit pants under the overalls. By the end of the day all of my extremities were feeling a little bit chilly and slightly numb!

As mentioned earlier the diary was totally cleared and a deadline was set for the transfer of the chickens into their new housing. Sometimes, you have to bite the bullet (as they say) and finish a project and that does require some sacrifices.

I haven’t really mentioned it before, but the boss chicken is named “Rumpole” after the BBC television series “Rumpole of the Bailey” due to a weird and uncanny likeness with the lead actor’s face. Anyway, Rumpole the boss chicken is ailing and at the venerable age of five years, she may not survive the next few months. I have been keen to get her into the new housing which may be better for her health in the final few weeks.

Last week’s blog entry discussed exactly what was not working with the current chicken house and run. I have now taken all of those lessons learnt and incorporated them all into the new Chooktopia structure.

August is normally a very wet and cold month at the farm, so I also became determined to get the chickens into their new housing before construction became too difficult because of the winter conditions. On a farm, the weather cannot be ignored!

With the exception of a few hundred metal screws plus the cement products, all of the structure in this Chooktopia project are either: recycled; seconds; or downgraded materials. Scavenging for the various materials in a project like this, and then envisioning how they can be used, is a real skill. Scavengers also have to be willing to collect those materials from all manner of strange and unusual places. And each collection place for those types of materials has a unique and often very quirky vibe to it. Sometimes, the people in those places can be exceptionally helpful, sometimes they can brusque, and at other times they can be aloof and almost embarrassed that they have to sell whatever it is that you happen to be purchasing.

Many years ago I purchased an absolute bargain of an unwanted water tank from an outer suburb of Melbourne. The houses in that particular area were very aspirational and to my eye seemed far too large for their land size. The guy that was selling this perfectly good water tank was almost embarrassed to have to sell it as if that activity was somehow beneath his social status. It wasn’t beneath his social status as he actually was selling the water tank and happily took the cash. I merely acted cool and chucked the water tank onto the (not quite bright yellow at that time) trailer and drove it back here where it has performed well.

This week that water tank was removed from its previous location on the farm – which left a bit of plumbing mess for me to sort out (next week) - and was repurposed as a water collection tank for the new Chooktopia project. That sentence was easily written, but the water tank itself is about 100kg (220 pounds) of food grade plastic (polyethylene) which is a very slippery material that just happens to be moulded into a rounded shape, all of which make it one very difficult item to relocate.

Needless to say the water tank was finally pushed, shoved and trolleyed into position to catch some of the rainfall from the roof of the chicken run and house. 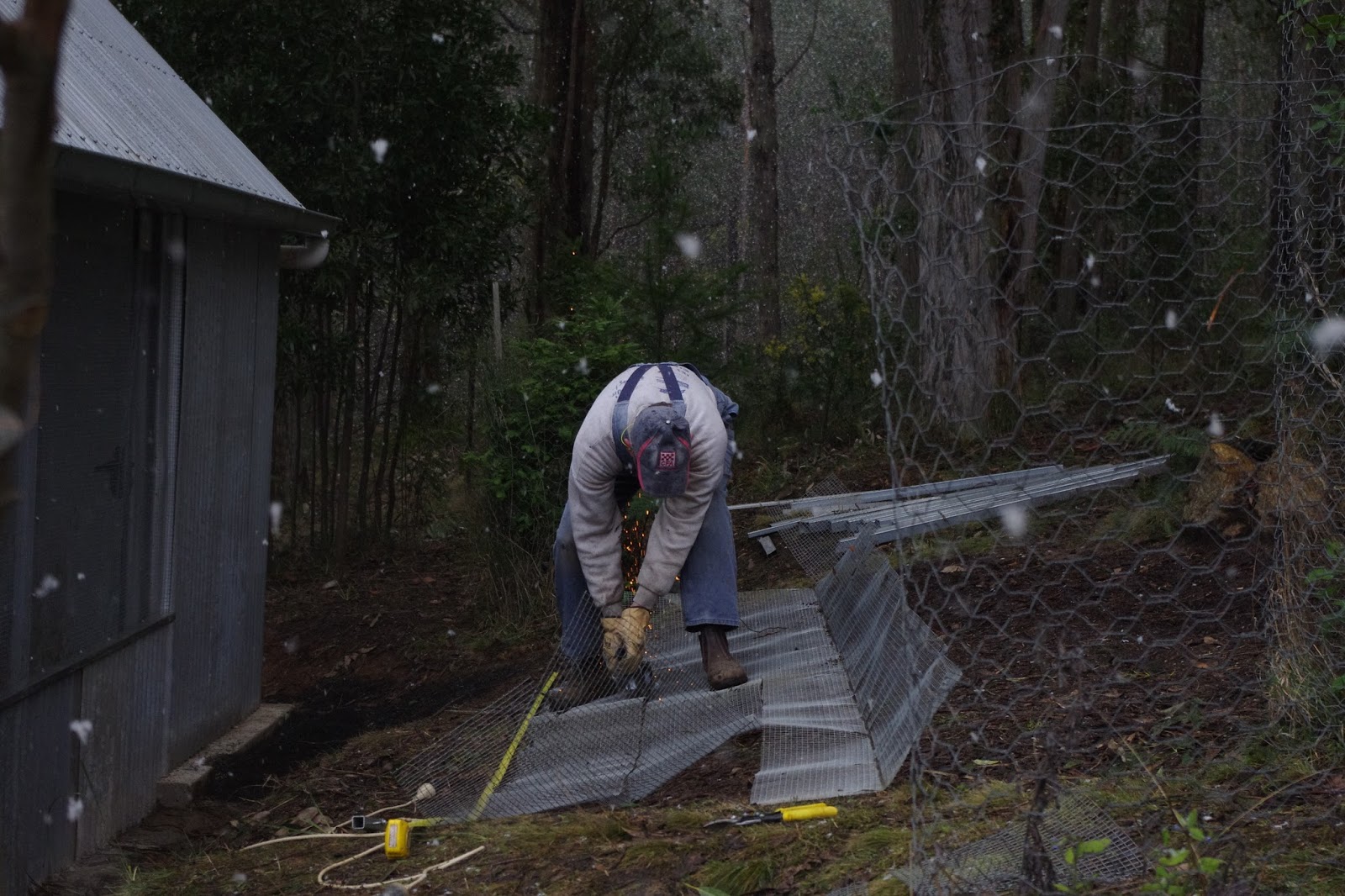