Give bees a chance

All we are saying is: give bees a chance.

I dabble with bees on the farm and have done so for a few years now. Australia is fortunately blessed with native bees and plenty of other insect pollinators. The thing is though, in the first year that I introduced European honey bees to the farm, the fruit set on the fruit trees doubled over that of the previous year. Fruit set, is the fancy name for whether the flowers on a plant or tree produce fruit or not after pollination – and it is the pollinating insects that do the hard work in that process and as far as European honey bees are concerned, they're heavyweights in the pollinating insect world.

European honey bees are quite prolific gatherers of plant pollen, plant nectar and water which they use to turn into the very desirable product: honey. The native bees aren’t even close to producing the sort of superabundance of honey that the European bee species can produce. In fact, this far south in a cool climate, the native bees will not produce any excess honey at all.

I like eating honey, using it to cook with and also for making mead (which is an alcoholic honey and water based drink). Honey contains at least 80% sugar so it is an almost perfect source of sugar for cool climates such as the farm here. It would take an awful lot of global warming before I could easily grow sugar cane here (which is the plant source for sugar). The old timers used to grow sugar beets, which will happily grow here, but they’re only 20% sugar, whilst most other fruits have much lower sugar content again. Nothing at all beats honey for supplying sugar in cool to cold climates.

However, the bees want to eat their honey, which is why they store it in the first place. It is their winter food store and they require that stored honey just to get the colony through the brutal winters that they evolved in. Winters in many parts of the world are far harsher than here and the European honey bees keep their hives warm by eating the stored honey.

It has been the coldest winter here in 26 years however, if the daytime temperature goes above about 10’C (50’F) at any time of the year, the European honey bees will be out and about enjoying the warmth and collecting pollen and nectar.

I grow flowers just for the bees (and the editor too!) and there are flowers of many different types all year around here so that even on the coldest days some brave plants are sporting flowers and the bees know all about them because when that sun shines, they will be busily going about their bee business and enjoying those flowers.

Over the past few years, I have had at least five different European bee colonies here at the farm. Four of them have died. Three of them collapsed over a period of three days two years ago. During those three days the temperature exceeded 40’C (104’F) in the shade - every day - and the wax in the frames simply melted. The bees as a colony did not die, they abandoned their hives in haste and moved to cooler conditions in the shade of the forest. In effect, I have populated the surrounding forest with European honey bees – and just to tease me they visit the farm regularly to let me know just how well they are doing out in the forest somewhere. The other colony died because it was attacked by ants very early in the season when the colony had not recovered from the winter.

As a disclaimer, I have not harvested any honey at all from any bee hive at the farm since I commenced the (expensive) hobby of bee keeping three years ago.

And I’m not the only one who is having troubles with European honey bees. Last summer alone, I believe that about 40% of the colonies on this continent died over the summer due to the extreme weather conditions. It is worth noting that because of Australia’s relative isolation, many bee problems have never even arrived here (such as the Varroa mite which is devastating colonies on every other continent).

European honey bees are fair dinkum hard little workers and all I reckon is that they deserve a chance!

As a general rule I avoid bee community groups because even despite the massive quantity of bee colony die offs all over the planet, they are some of the most dogmatic people I have ever encountered. And that is saying something. As a general observation, it is a most impressive achievement to maintain dogmatic beliefs in the face of absolute disaster! I say instead: Give bees a chance!

I appreciated failures at the farm (although not too frequently I hope - edit) because that is generally the time that I have to stand up and admit what went wrong and then learn from those errors. Most of the time I have to then repair the mistake and correct the underlying errors!

So this week I began constructing a slightly different type of bee hive, which as far as I know is a completely original design. If anyone wishes to duplicate this design, feel free as long as you acknowledge me as the source of the design.

The first thing that you’ll notice is that the bee hive is constructed from heavy duty hardwood. The reason for this is that I have observed that bees in the forest live in logs and tree hollows. The thicker timber in those natural bee habitats provides a greater level of insulation from the external temperatures during the winter and summer. My thinking behind using thicker hardwood is that honey is the bees natural winter food storage and if they are subjected to cold temperatures, they will consume far more stored honey as an energy source just to keep the colony warm. The standard commercial available frames here use very thin pine and it is just not up to the job of providing any insulation between the colony and the external environment. The thin pine is cheap though. 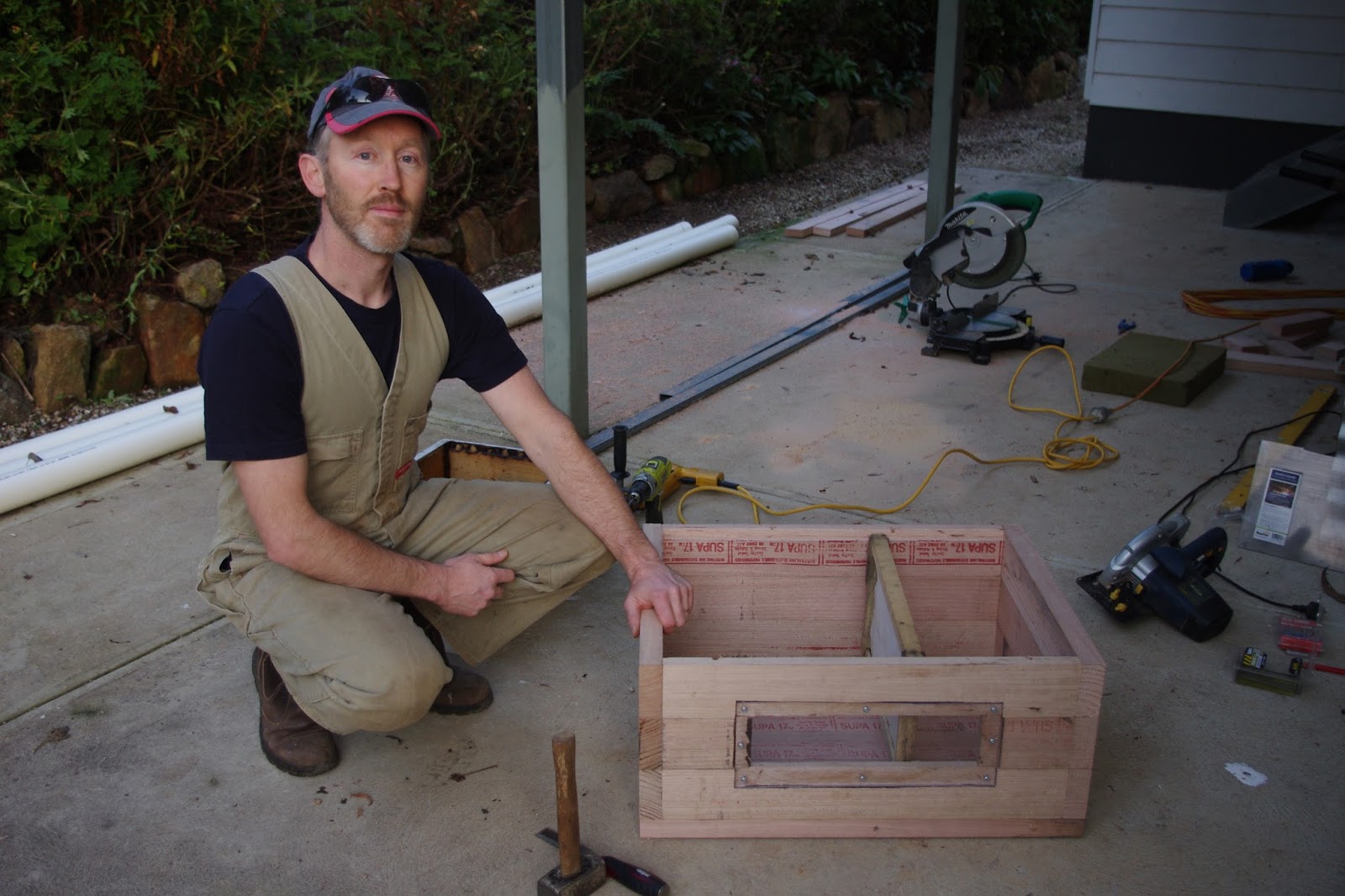