It is not often I’m impressed with new products. Many new products are complete rubbish and very poorly made. I have a saying for that very circumstance: “That product is in for a good time, not a long time”. However, very occasionally even I can get suckered in by a bright new flashy product.

Living in a remote spot surrounded by tall forest where even the neighbours are a distant memory, a person can easily forget about the world and all of its concerns. It is a sleepy way to pass the time and the biggest outrage can be when Stumpy the house wallaby has decided to destroy your favourite citrus tree. The seasons come and go and one day you look down into the orchard at dusk and discover that one of the two kangaroos that call this place home has grown up and now has a joey in her pouch and that joey is reaching out of the pouch to taste some juicy compost fed herbage.

So to avoid falling asleep at the wheel, I regularly travel into the big smoke of Melbourne. Fortunately the country train services can get you there faster than a car and in considerably greater comfort – they’ve even got toilets on the trains! And from the Southern Cross Station with its wavy roof at the southern end of the city, I walk around and just look. Often those walks can take hours at a time.

Over the past decade or so, the influx of University students to Melbourne (whom mostly derive from the Asian countries) have changed the city completely. Two and half decades ago the city at night was a complete dead zone where nothing moved other than the occasional rodent or wino. Sure, there were nightclubs, and they were dotted here and there, but away from those spots the city was dead. Nowadays, the city is full of life at night, people are everywhere, and there are even small hole in the wall restaurants that are frequented by their regular patrons. To me the exhaust from all of those restaurant kitchens reminds me of the alluring smell of an Asian city at night. It is a vibrant place to visit and I enjoy it.

However, the long walks mostly take me through that city area and into the inner northern end of the inner city where all of the hipsters congregate. There are late night cafes where I can enjoy a well-earned coffee with an exotic and also very tasty cake. Quality food of many national origins is also there to be enjoyed. Sometimes it is a hard decision to know where to eat: Do I enjoy the Cajun food or maybe try some outstanding Chinese dumplings or maybe even something else altogether?

The inner north of Melbourne is not only a place to find good food, but there is also the previously mentioned hipster congregation. If you’ve ever wanted to spot a Ned Kelly beard (so named by me after a notorious bushranger in the 19th century who ended his days hanging from the end of an official noose), well, the inner north of Melbourne will satisfy that curiosity. Personally, I don’t get the bushranger 5,000 overdrive thick beard look, but that may be a matter of personal taste – they just look like the beards are possibly unwashed and that is a bad thing!

Unwashed beards aside, that inner part of Melbourne also has a lot of leading edge design shops displaying their various wares for sale. A lot of the products on display at those shops are locally made and chock full of creativity. I enjoy viewing those products on display through the windows because they are usually constructed lovingly with care and attention to both the detail and finish. I respect such work for the art that it is.

Over the past year or so, I’ve noticed that many of these leading edge design shops were illuminated by some very funky, old school, steam punk, filament light globes. Those funky light globes have always reminded me of the sort of light globe that you’d see in a Victorian era mad scientists workshop. I can just imagine the mad scientist (with the funky light globe in the background) working alchemistic miracles to bring Frankenstein back to life!

It is worthwhile remembering that the house here is completely powered by solar photo-voltaics and batteries and as such energy hungry devices can generally apply for residency elsewhere as there is no tolerance for them here (edit – Hair straightener, hair dryer and Italian espresso machine are excluded!).

So, on Friday evening I was on my way to get some Mexican food and stopped by the hardware store in the nearest big town to pick up a couple of new light globes. It’s an exciting life here at Fernglade Farm and Friday nights are no exception to that rule! Anyway, to my utter amazement, the hardware store stocked those funky steam punk light globes and so I thought to myself: I’ve gotta get me some of those! As I said, it’s an exciting life here at Fernglade Farm.

I installed the steam punk globes in the hallway today and I can report that they use very little energy (about 25W a globe) and whilst they emit stuff all light, wow, do they look cool or what?

The hallway is a good spot for those globes because I don’t need much light in there anyway, and they remind me of the ambience of a late night bar or café which seems sort of appropriate for a library. Even Poopy the Pomeranian – who is sporting a very recent haircut – approves of the new light globes!

Back to more serious farm business and the new design bee hive received a coat of quality paint this week. I have also installed some removable plywood sliding covers for both the double glazed perspex observation port and also two of the three round entrance holes on the opposite side of the hive box from that observation port. The plywood cover over the two entrance holes will be in place when the bee colony is still young and they may not have enough guard bees to be able to defend all three separate holes. As the colony gets stronger and gains more numbers, I’ll then be able to remove that cover over the remaining two entrance holes. Over winter, that entrance cover will be in place to assist the bee colony using less of their stored food energy (honey) to stay warm. 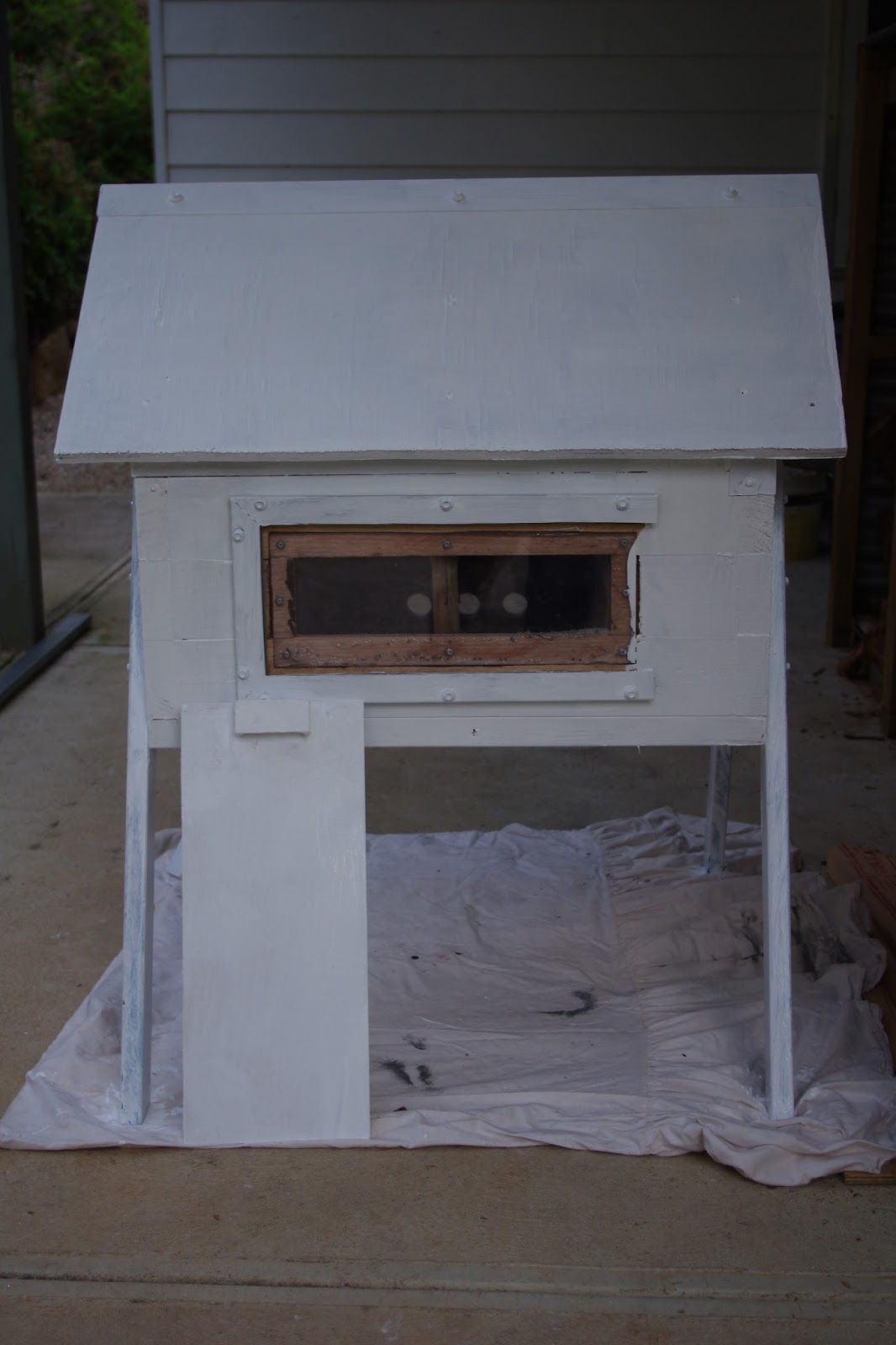