Around two decades ago, life found me hanging out with friends at their house. It was the usual sort of hang out in those days which meant talking rubbish, partaking of the occasional ale, making up rubbish plans to take on the world, but mostly it just involved us talking pure rubbish.

The memorable thing about that particular visit was that my friend’s father was visiting from New Zealand and had decided to stay in Melbourne for a few days. My friend was the youngest of about eight siblings, so the father was of quite advanced years and I'd never met him before.

Clearly, the father was a man of few words, because once the introductions were made, he shook my hand and said, “Very Nice!” – and that was that, because we did not enter into further verbal discourse!

So, I’ve been left with this long unsolved mystery. What exactly did he mean by that phrase? I’m not usually lost for words, and in fact it can be very hard to shut me up sometimes, but on that particular occasion, I was completely stonkered for a reply, so I simply shook his hand and must have looked like a deer in the headlights… It didn’t actually help that my friend for many years afterwards, usually with a highly amused grin on his face, used to rib me by repeating that exact greeting phrase.

And back in those days, it wasn’t as if you could jump on the internet and type in a search request for the actual social meaning of that phrase as a greeting. Agony aunts were plentiful and actually useful in those days in such a situation, but it was a bit touch-and-go as to whether they would actually reply to your question as they were a law unto themselves and wielded their powers for both general amusement and self interest.

Spring has sprung here. That is "Very Nice!".

This week the weather has warmed and the sun has shone strongly. On the other hand, some of the nights have been actually colder than the recent Antarctic anomaly, so please spare a thought for poor Poopy the Pomeranian who stoically endured a haircut last week and then had to spend those cold frosty nights quietly asleep in front of the wood heater (instead of his usual outdoor sleeping arrangements)! Unfortunately for me, Poopy enjoys waking up at the crack of dawn and so he has been a bit of a nuisance.

However, the days have been warmer, the sun is a little bit higher in the sky and you can now feel its bite. A lot of the fruit trees are still only just producing buds, whilst many others are producing blossoms. The Echium plants have gone from strength to strength.

The bees think that the Echium flowers are "Very Nice!" too, because they are all over them during the day, doing their bee like thing. The activity in the bee hive is starting to pick up pace and I’m wondering whether I should add an extra box to the current hive. An observation port would be a very useful thing in that existing bee hive.

Another very reliable and very early flowering plant is rosemary. I have quite a few different varieties of rosemary growing here at the farm and I read that Pliny the Elder from way back in the days of the Roman Empire reckoned that rosemary plants are excellent herbs for memory (I can’t recall
(edit - hahaha) how many different varieties of that plant that I have growing here!). The rosemary flowers come in many different shades and I spotted this unusual duck egg blue coloured rosemary which the bees were clearly enjoying: 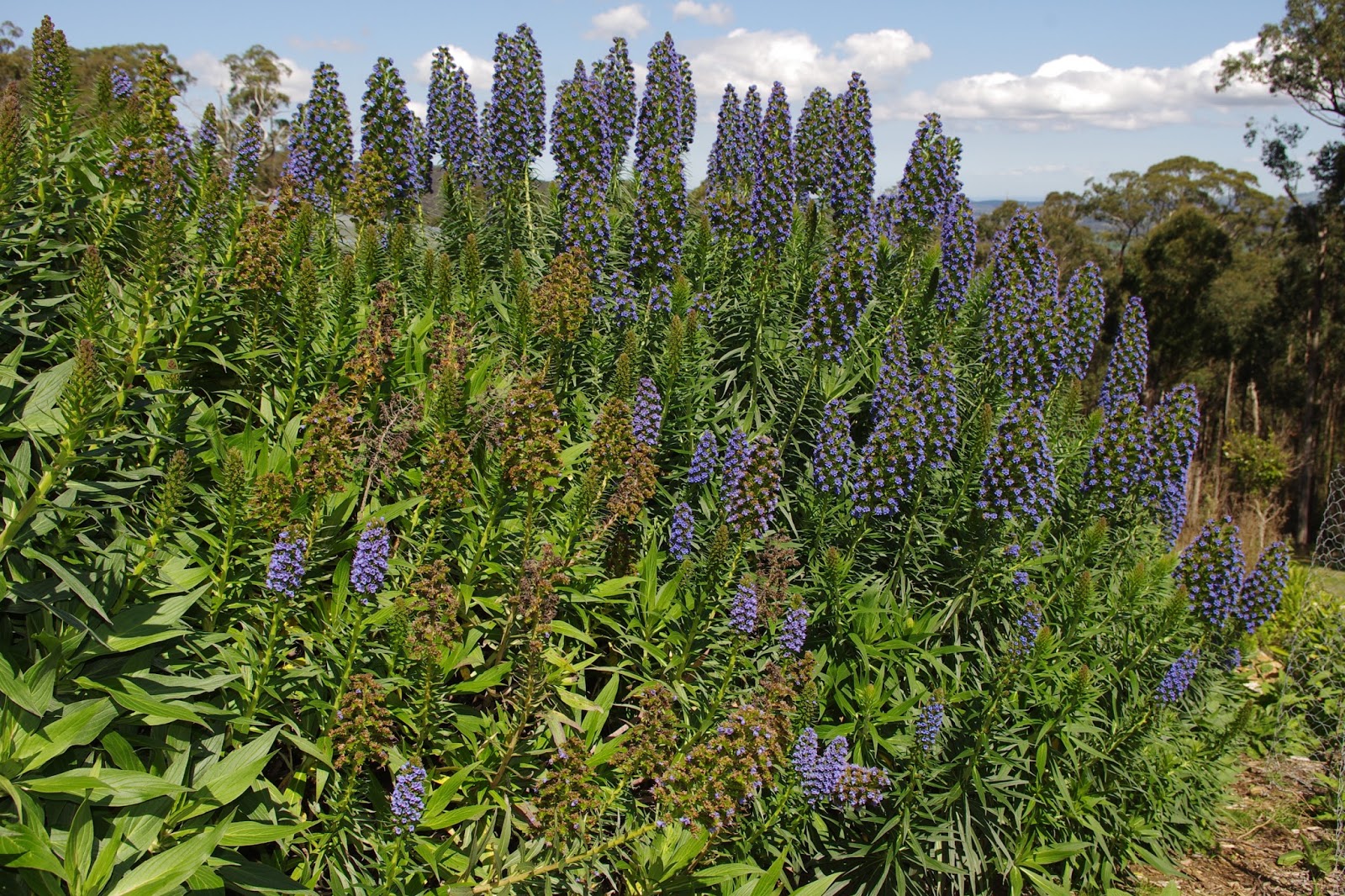