Toothy the long haired dachshund is a feisty little character. He has a quick temper and loves a bit of scrapping. Scrapping is the act of fighting, normally hand to hand – but in the case of a dog – claw to teeth fighting. Despite his diminutive stature (dachshunds are a little bit height challenged) he’ll happily chase birds all day long. And despite years of attempts and his lightning speed and quick reflexes, Toothy hasn’t caught a single bird! The birds here know his traits well and mercilessly tease him by always staying just out of reach of those teeth.

Being close to the ground gives Toothy some serious strategic advantages in the rough and tumble world of being a dog here.

Remember that Toothy is an expert in scrapping. If Toothy decides to steal some of Poopy the Pomeranian’s breakfast (Poopy is actually a Swedish Lapphund), then that thought is quickly followed up by a bit of Toothy growling to announce his intentions. That Toothy growling then escalates to some close range threatening teeth action. Poopy starts looking quite nervous about the possibility of losing his breakfast.

In the days of myths and legends of the far past, Dragons were said to have a weak spot on their underbellies and the knights of yore who were stupid enough to even consider battling a dragon always attempted to attack that weak spot. Poopy the Pomeranian is sort of like a dragon as normally he would have no reason to fear the much smaller Toothy, but Poopy is unfortunately long of leg and even longer of tail and his underbelly bits are seriously exposed. Toothy knows that every dragon has a weak spot on their underbelly and he deals with Poopy on that basis. And Poopy lives in fear of losing his breakfast (and other bits) and has learned to eat very quickly indeed.

And that is how Toothy earned his name.

Dragons look like very large birds to me. Toothy the dachshund has an unhealthy obsession with all things bird, so he’d probably even try a bit of scrapping with a dragon – who knows? Fortunately, for all of us here at the farm, dragons seem to be a very unlikely problem! However, I do actually keep birds here (chickens) and Toothy would love nothing better than to take on the chickens with a bit of scrapping action and I wrote about his obsession in the previous blog entry: All day I dream about chickens.

Anyway, my tolerance for the obsessive Toothy has come to an end because I felt that sooner or later one of the chickens would accidentally be let out of the chicken enclosure whilst the dogs were roaming around and then we’d all find out who was tougher: Toothy, or the unfortunate chicken. I say unfortunate chicken, because I reckon Toothy would win that particular scrap.

This week, both Toothy and Sir Scruffy assisted me with the construction of a steel lined vestibule entrance to the chicken enclosure. In the above photo the obsession that Toothy displays for the chickens is almost palpable. Sir Scruffy is the other scrappy looking dog in the photo and he is a sophisticated older gentleman and as such is above those obsessions – you can see the look of disdain on his face in the photo above. 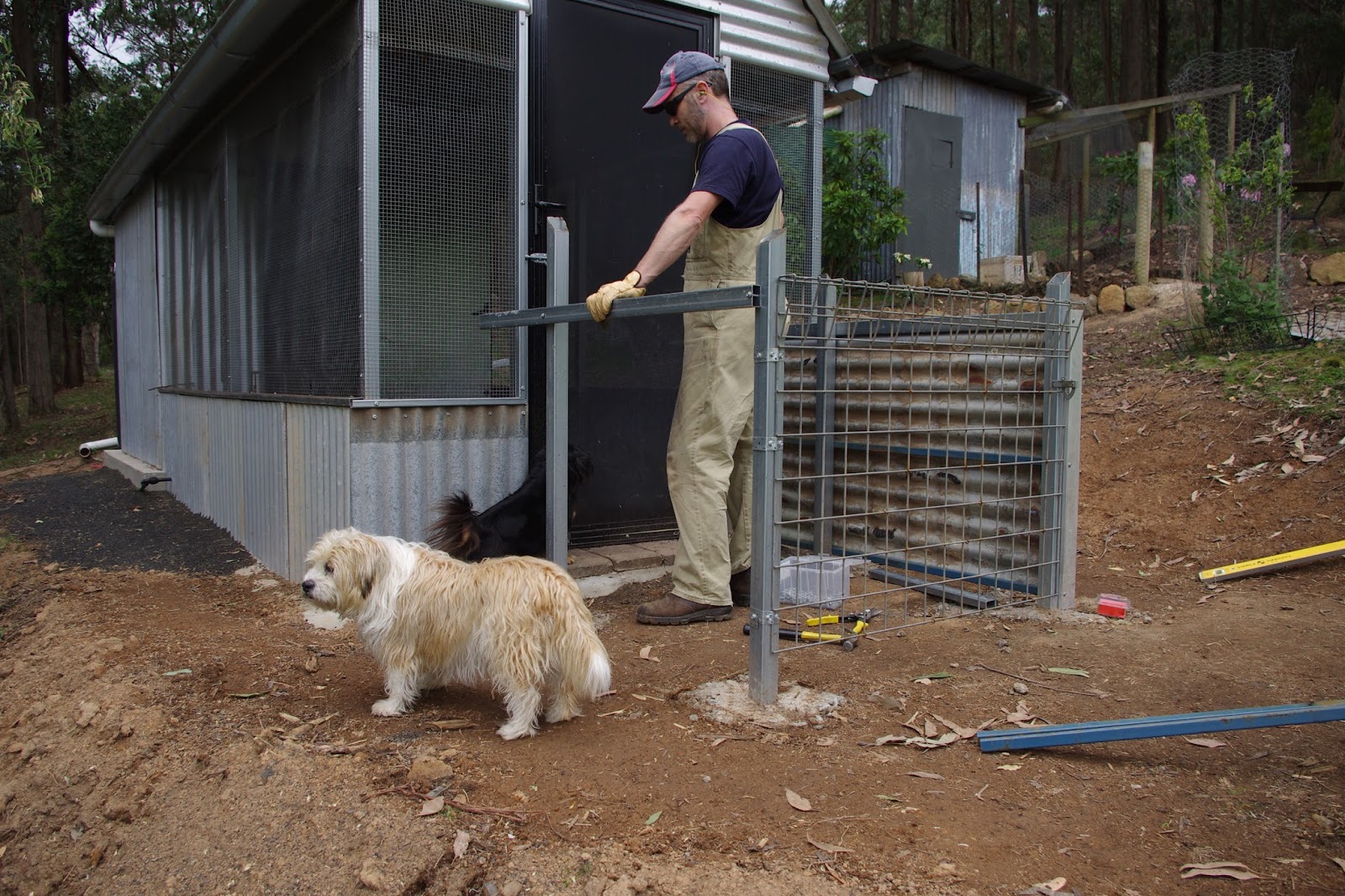 The idea behind the vestibule is if one of the chickens accidentally sneaks out of the open door to their enclosure, they are safely trapped within the steel lined vestibule and I can quickly herd that naughty chicken back into their enclosure without very real possibility of Toothy trying to eat them.