THE EDITOR STRIKES BACK

A long time ago in a mountain range far, far away….

Well, to be totally honest it was only a few weeks back, but it does seem like a long time ago that the new chicken enclosure “Chooktopia” project was completed. The completion of the new chicken enclosure was a real setback for the Rebel Rodent Forces (Rattus rattus or otherwise known as the common black rat or RRF!). The Imperial Troops (myself, the editor and the dogs) then drove those rebels from their hidden base and pursued them across the farm and into the depths of the forest. It was a dark time for the rebel forces.

We still haven’t yet decided which of the Imperial forces here is Darth Vader and who is the Evil Emperor. For all we know, maybe Scritchy the boss dog is actually the Evil Emperor. Poopy the Pomeranian (who is actually a Swedish Lapphund) is probably just a regular Storm Trooper (or perhaps a very evil Chewbacca) as he does most of the heavy lifting when it comes to chasing unwanted wildlife off the farm. It is worth noting that in such situations, Scritchy the boss dog is usually to be found at the rear issuing instructions to the storm troopers. Therefore given Scritchy’s hands on nature (but at a respectably safe distance from the wildlife) she is probably more of a Darth Vader character. That then leaves the unanswered question: who is the Evil Emperor here?

The rebel rodent forces enlisted some unexpected assistance this week – perhaps they used the Force? The assistance attacked the very pride of the Imperial fleet which was assaulted in a daring and audacious move that the brilliant and long dead Chinese military strategist Sun Tzu would have approved of.

Friday night, the rebel forces employed their heaviest battleships (i.e. deer) and assaulted the death star (aka some eight year old fruit trees). The damage to the bark of the death star – oops, sorry, the eight year old fruit trees – was severe. Darth Vader, aka Scritchy the boss dog is less than impressed by the actions of the new augmented rebel forces (i.e. deer).

At the moment, I am in the process of urinating randomly (using my light saber?) all over the orchard to mark this as territory for the Imperial forces. Hopefully, that does the trick. However, I still have the option of putting loose fitting chicken wire around each of the fruit tree trunks and that will permanently sort out the deer / rodent rebel forces.

On a serious note, I'm interested in hearing from anyone with experience with this sort of damage as it is unsustainable and the deer could possibly destroy the established orchard within a few short weeks. I am also considering painting house paint onto the damaged trunks, and would appreciate feedback on that option.

Deer are loose in this mountain range (coincidentally there used to be a deer farm below this property), however I have never seen deer on the farm before. The reason for this is because maybe whilst rainfall in the mountain range this year has been reasonable, elsewhere it has been very dry. Nothing eats deer in the mountain range, so perhaps the deer are ranging ever higher in elevation than before to enjoy a bit of green fodder. Poopy the Pomeranian and Sir Scruffy both of whom are the Storm Troopers (nuff said really) have their work cut out for them this summer. 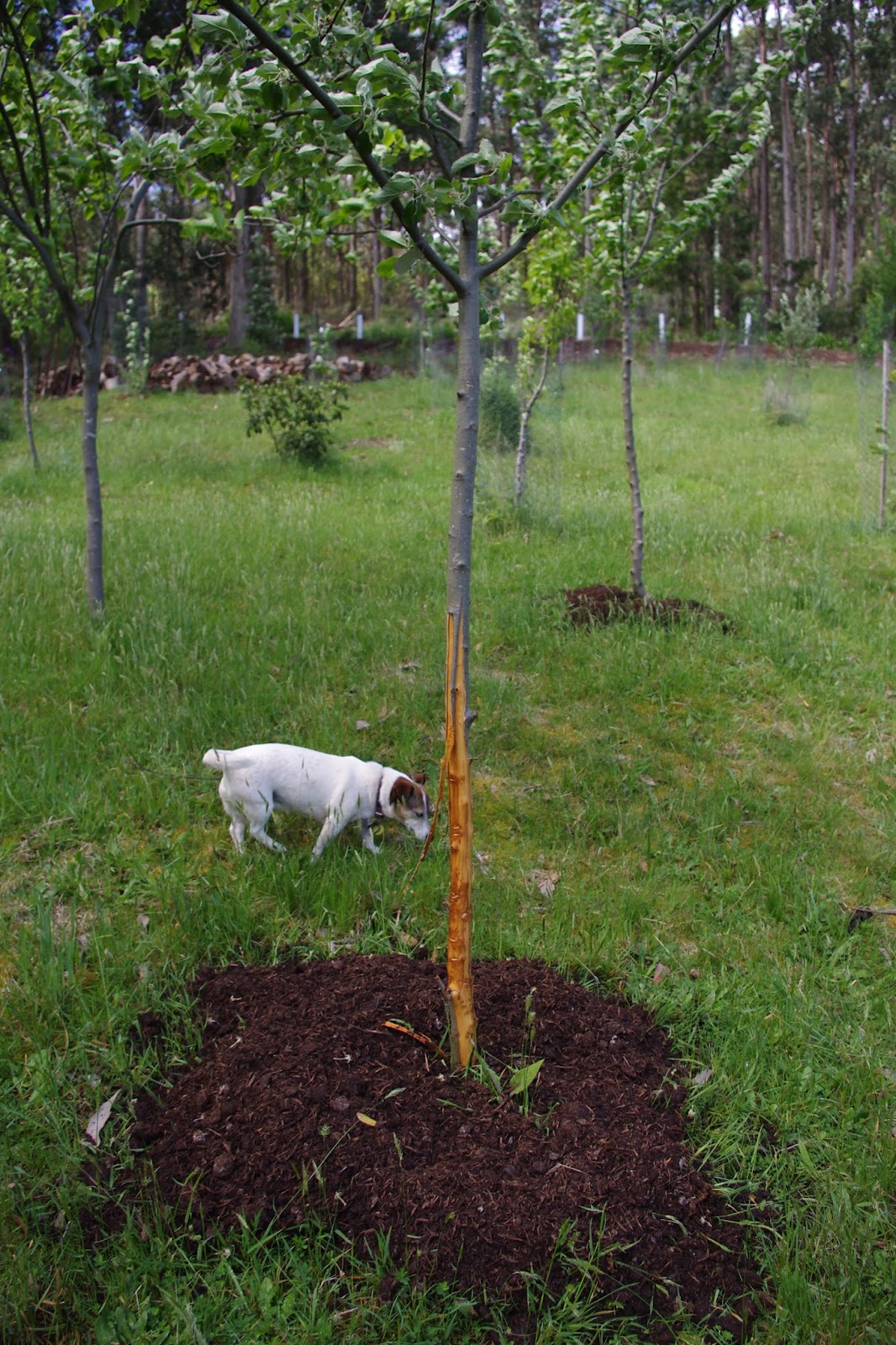