I like my new shed better than my old shed

But before we look at the process of deconstructing the old chicken shed and run, it is worth mentioning that the weather this week has been particularly extreme. The weather has produced little to no rain and the daytime temperatures have changed from very hot one day to quite cold the next day. Some of those changes in maximum daytime temperatures have been as much as a 20’C degree difference.

When the winds blow in from the south of the continent, they bring in cold air from the Southern Ocean and temperatures can plummet often quite quickly. The dogs are understandably a bit reluctant to venture outside on those very cold days and they instead lounge around the house conserving their energy until the outside weather becomes optimal for their canine selves. I’ve given those very cold days the nickname of: “sub fluffy optimal” and in the photo below you can see the very real and serious effect that sub fluffy optimal days can have on the hard working dogs here. It is very distressing to observe and I do hope they survive such stressful conditions:

Observant readers will notice that the old chicken run was seriously over engineered as there were two layers of thick gauge steel chicken wire running all of the way around the chicken run. There was also a plinth of fibre cement sheet with logs in front of those. The whole lot was held in place by hundreds of very solid nails. And I spent hours regretfully removing all of those nails this week.

The funny thing was, that whilst I was worrying about the dogs and foxes impact on the chickens, I was completely oblivious to the unexpected problem of rats and mice, which as regular readers would now know, completely overwhelmed the old chicken shed and run’s defences. There were a whole lot of fat, happy and relaxed rats in that old chicken shed enjoying the chicken food and water.

Anyway, all of that over engineering had to be removed from old chicken run before I could commence any work on converting the old chicken shed into a brand new (well, almost brand new) fire wood shed. The process of removing the over engineering around the chicken run took well over a day, but was eventually done. It is worth noting that there is now a pile of materials messily lying about the place just waiting to be properly and neatly stored in an all-weather material storage bay, but that is the next project in the long list of things to do here at the farm!

Eventually the two layers of chicken wire were removed from around the chicken run and I was then able to start deconstructing the timber structure that held up the steel mesh roof of the chicken run. The roof beams for the chicken run were secured onto the treated pine posts with large galvanised steel bolts and fortunately they were quite easy to remove and store for later reuse.

In the photo above, we can also play the continuing game of “Where’s Toothy?" for those that dare take on the Toothy photo-bomb challenge!

Observant readers would have noticed in the various above photos all of the lush vegetation that has grown in the old chicken run since the chickens were removed to their new chicken run and shed - the “Chooktopia” project from the middle of this year. In the close up photo below of all of that lush vegetation, I can spot: poppies; green mustards; wild brassica; carrots; coriander and I’m unsure whether it is either barley or wheat (time will tell). All of these plants have grown without any care, water or attention on my part and it has made me wonder whether I am putting too much effort into the vegetable beds here? I reckon the poppies may have come from the uneaten poppy seeds from my bread! 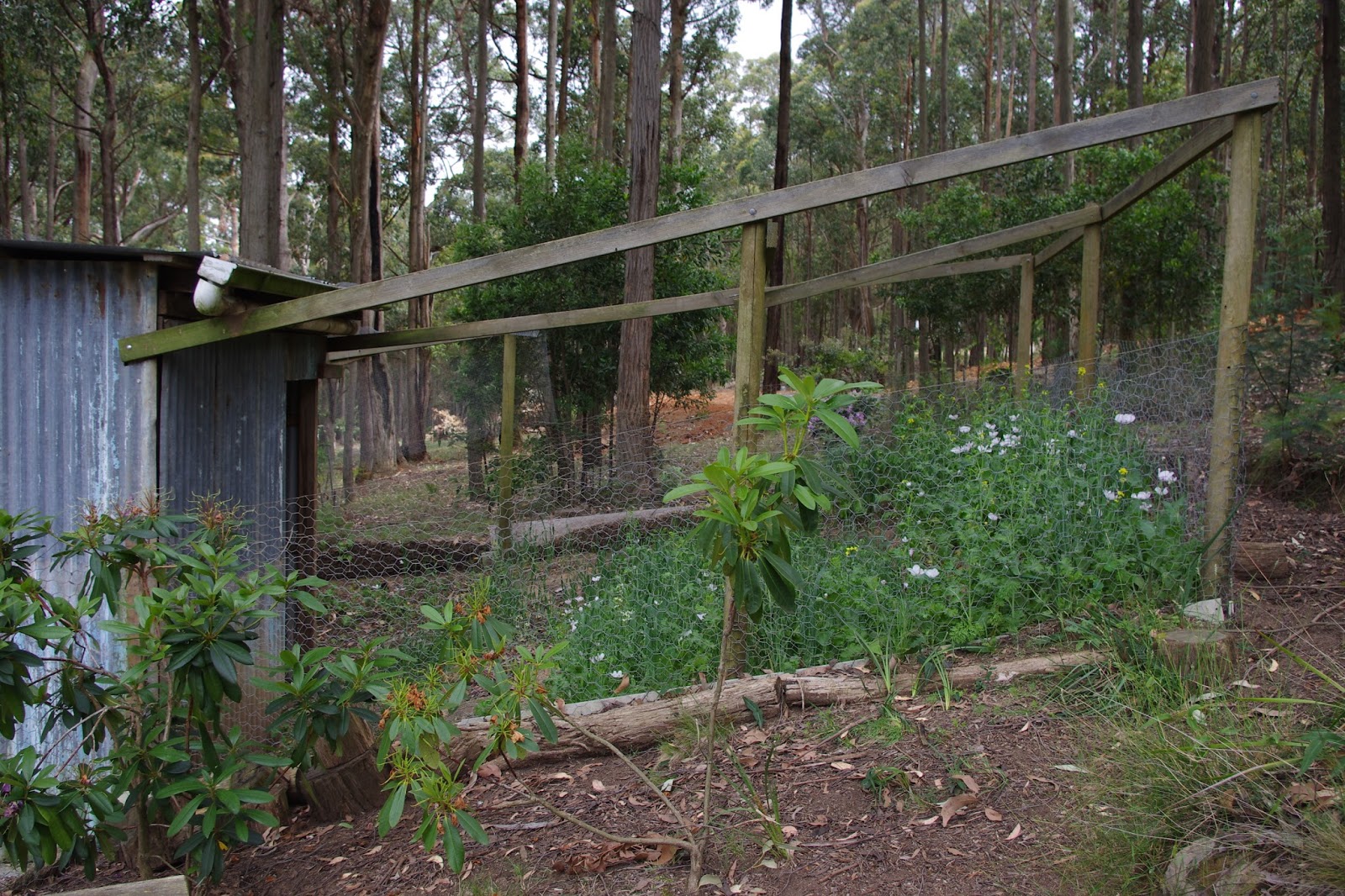