Summer has arrived. The air is hot, dry and dusty. The trees are still green, the ground is turning yellow and brown, and the vegetation is drying. A eucalyptus haze hangs over the mountain. You can smell the trees. Grass now crunches beneath my feet and bidgee widgee burrs stick to my shoes (also Sir Scruffy). The drone of insects buzzing around flowers evokes memories of hot summer days as the birds are wisely quiet during the heat of the afternoon. When the heat is intense enough the cicadas sing their summer song in the mid-afternoon slump.

And so you may wonder what I’ve been up to in those hot mid-afternoons? Well, the early heat wave this week has forced me to rise early in the morning and stop all outside work by about 1pm. It is just so hot that working in the full sun is not an option. Summer is a time of lazy afternoons and the editor thought that the regular commenters may appreciate seeing the exact conditions under which I labour replying to the many lovely comments to this blog:

No, I won’t argue with you, it is a hardship which I’ll stoically endure…

Unfortunately, it isn’t all just lazing around on long hot summer afternoons. Those lazy afternoons are the perfect time to begin the continuing process of preserving the summer goodies so that in the depths of winter a person (me) can enjoy a brief recollection of those long lazy summer afternoons.

This week was my first foray into the world of preservation of fruit by the process of dehydration. I recently purchased a second hand Fowlers Vacola (Ultimate 4000 dehydrator) electric food dehydrator and am today using it for the very first time here preserving apricots and cherries. The entire drying process can take between 10 and 16 hours and it is a great use of solar electricity that would otherwise have gone to waste.

I have previously wondered why lemon trees were so popular in old gardens down under. In the older inner urban areas of Melbourne, it seems as if every single household used to have a century old lemon tree which produced huge quantities of fruit every single year – without a care or thought by the owners of the property. As a child, I can distinctly recall the feel and smell of climbing in the very old lemon tree that my Grandmother had. In more recent years however, no one seemed to ever know what to do with the lemons.

Over the past year or so I started having to contend with the realities of what to do with several hundred lemons per year from the fruit trees here. And the answer finally popped into my head this morning. Lemons provide a cheap and easily available form of citric acid which was traditionally used for preserving. If you are making jam – you can use lemons to provide the acid which assists with the preserving process. Most other preserving processes use lemons to provide enough acid to ensure that nasty bugs don’t make you sick later on or that the preserve spoils (or even dares change colour!). Plus don’t forget the many varieties of wines, all of which require lemon. I’ll tell ya what, I can’t get enough of them lemons and look forward to the day when all of the trees are producing strongly. Go the lemon!

So, I had to squeeze the juice from about 20 lemons this morning in order to get enough lemon juice, which you may recall is absolutely full of citric acid, for part of the dehydrating process. The apricot halves which I was about to dehydrate had to be immersed in that squeezed lemon juice for about 5 minutes as part of the dehydration process.

I also halved an additional two dehydrating trays full of cherries and they are also now in the dehydrator happily dehydrating away. What was interesting was that the instructions (which are from a local supplier) stated that the cherries did not have to be immersed in the lemon juice, and were OK to use as is. Perhaps you could assume from the instructions that the cherries have a high enough acid content? The fruit halves are then placed on the dehydrator trays and the lemon juice is bottled up in glass jars and chucked in the freezer for later use (hmmm, more lemon wine?).

And after three and a half hours of cooking (the entire dehydrating process may take between 10 and 16 hours all up) the fruit looks like this: 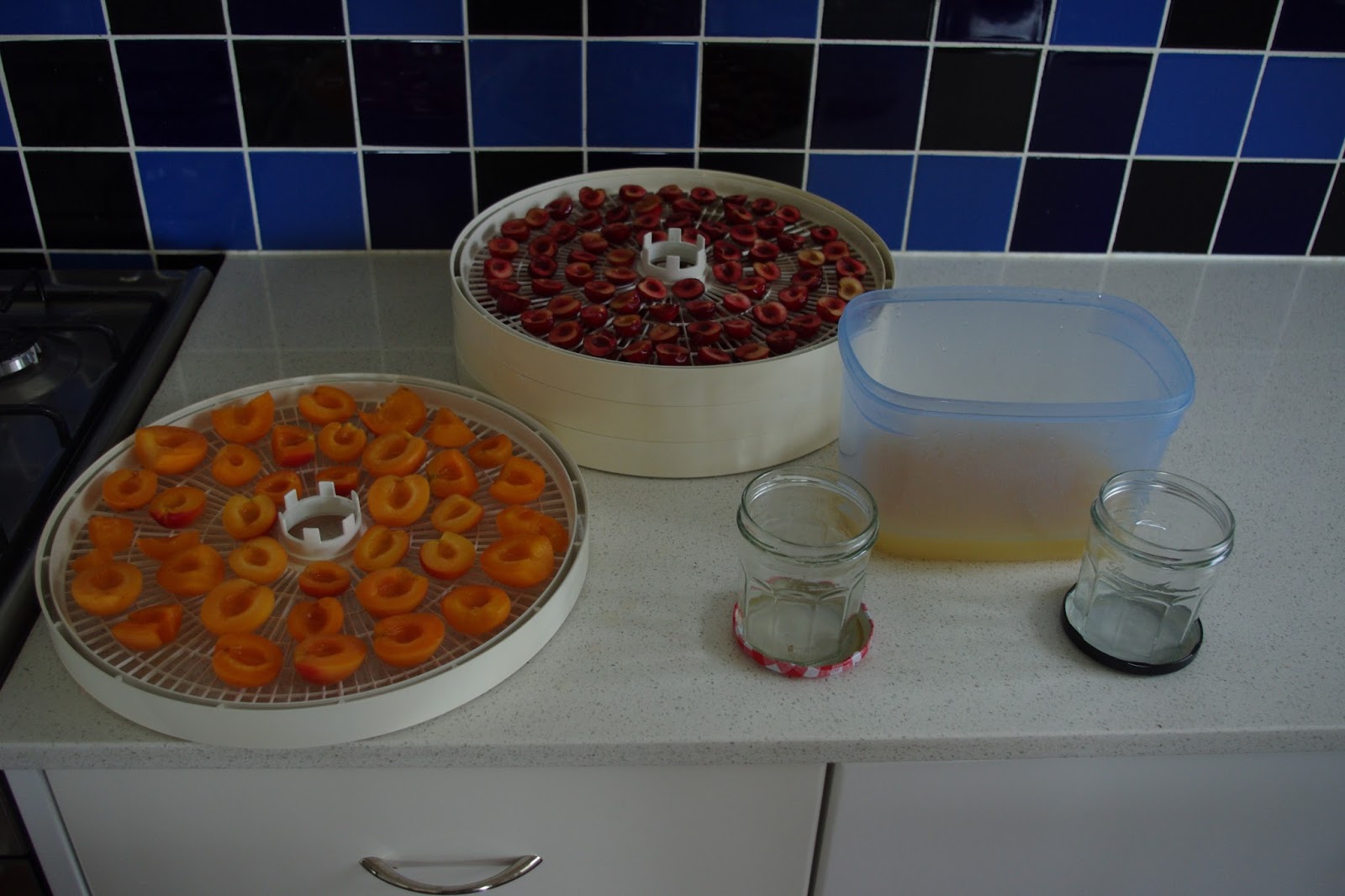